ALL YOU DO IS PERCEIVE

“‘Happiness is on me like a scratch in a car door,’ writes Katz in her second full-length collection. Hovering between delight and danger, the poems exist in a place where an ambulance “dazzles like a cocktail ring” and a “little holocaust kicks the kitchen chair.” With her buoyant tone, Katz heartily welcomes the reader: “Are you going to sit there? Coincidentally I am also going to sit there. Can you see out of my eyeholes? Are you comfortable?” Katz’s poems muse over fellow F train riders, entertain violent fantasies toward a visiting poet, and wonder whether to lunch on a dead neighbor’s tomatoes. There is joy in the poems and a linguistic playfulness underscored by the fears unique to a new mother and her child. “Mother’s Love,” a nine-part poem that anchors the collection, is inspired by a friend who said that using heroin feels like “mother’s love.” The poem explores the all-consuming experience of a new mother from a fever-pitch of perception: “We are addicts, an old boyfriend would say/ This is not that. But it is/ I am helpless/ My hair fills with sparks.” Amid ecstasy and terror, the mother worries about her ability to protect her child, to keep “the woundable face of a boy” safe from the many dangers he’ll encounter.” — Publishers Weekly

“Joy Katz is a receiver tuned to its highest possible sensitivity. Over and over, she brings in the faintest and most intimate signals–the ‘oiled sound of a dog’s dream,’ the ‘hurt growl’ of tape stripped from the roll, her baby’s ‘pah of little flame.’ ‘I will bind myself to the thinnest sounds,’ she says, ‘the feather coming out of its pillow,’ and with a hearing so acute that it is a kind of mindreading, she risks being swept away by talkers who just won’t stop, ‘laughter like breaking plates’ and the ‘the sky…getting louder.’ Katz is an empath with no defenses, as in the brilliant parable of obsession where she finds us a seat next to her, helpfully inquiring ‘Can you see out of my eyeholes? Are you comfortable?’ In Eliot’s words, she’s a ‘soul stretched tight across the skies,’ and in her own, tremulous and sharp and pointing where we might not have seen, ‘a needle afloat on plain water.’ There are all kinds of reasons for reading these poems– their deftness of movement, a whimsy that deepens into something like myth–but I am most grateful for the intensity and sheer intelligence of their feelings.” — James Richardson

“All You Do Is Perceive starts out with a poem for an adopted son and itself adopts the wide-eyed linguistic playfulness that marks other mother-poets such as Bernadette Mayer and Lee Ann Brown. While Kant warned us that perceptions without concepts are empty, Katz takes up the problem by its other handle and asserts that our perceptions of the world around us create a foundation for empathy.” —Ange Mlinko 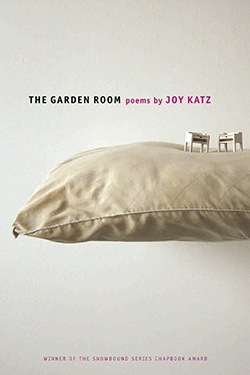 Joy Katz’s second collection explores the ecstatic, shifting, often disturbing consciousness of household objects—linen closets, unmade beds, ceilings. Color becomes an inhalable ether; a junk drawer barks, then ticks like a bomb; a desk longs for the gravitas of “heavy telephones.” The book, itself an act of dwelling, is by turns nervous, serene, funny, and elegiac.

“Katz’s brief and cohesive collection examines—using psychologically telling description and imaginative reportage—the ways that objects in a room do and do not reveal the lives of those who live there. Speaking to and for household objects, and harking back to Elizabeth Bishop’s prose poem “12 O’clock News,” the object-poems of Francis Ponge, and Gertrude Stein’s Tender Buttons, Katz makes the bedroom a crenellated emotional meeting and battleground where self meets self, lover meets lover, and self meets other. A bunch of daffodils is “a hole in the room I could thread myself through”; the bed “is a highway between us”; windowsills are the “lips of the house.” Over the course of this collection, Katz builds a moving story about the complexities of love and domesticity.” —Publishers Weekly

“Katz creates creates interesting tensions between the clearly visible and the roaring mysteries behind it all. And her mysteries do roar.” —Antioch Review

“I’d like to step into spring on these poems.” —Forrest Gander

“The poems project creation’s argument with creation onto the green tabletop of the world.” —Donald Revell 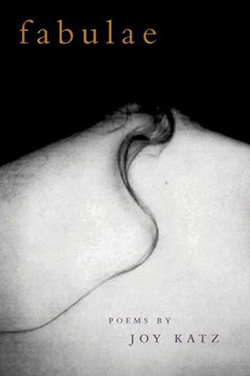 “Newcomer Katz offers surprising takes on femaleness, beauty, life, death, and the vagaries of perception in aesthetically immaculate yet emotionally and intellectually assertive poems. She conjures a scene with Orthodox Jewish diamond dealers and a girl determined to break out of all that orderly black and white. Elsewhere a mother watches her two daughters sunbathe beside a pool, a grandmother is “glad the age of pleasing is past,” and Adam and Eve are OCD. A smart, imaginative, and mesmerizing collection. —Booklist

“Joy Katz has nothing to prove.” —Parnassus: Poetry in Review

“Katz is poet of invention and verve. —Verse

“Katz’s imagery of despair sometimes echoes Sylvia Plath’s, but Fabulae is neither self-absorbed nor histrionic. The poems, even those in which Katz herself explicitly appears, focus on the sufferings of others and her scrupulous care to understand them.” —Blackbird

“Katz considers the history and culture we all stand, finally, as heirs to: from Dachau to the deceptively still surfaces of American suburbia, from Proserpina to Plath, from the subjugation of women to the lust for empire—and the result is a collection as rich as it is ambitious, announcing an already accomplished new voice in poetry.” —Carl Phillips

“Joy Katz is the quintessential storyteller. The pleasure of reading Fabulae comes also from the way the elements of narrative, from the simple to the fabulous, are compressed into beautifully crafted poems. There’s no background hum in this wonderful book—no skimming allowed.” —Maura Stanton 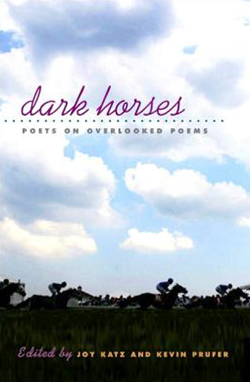 Too many amazing poems end up overlooked by the academy and excluded from the canon, remaining largely unknown to readers of poetry. Dark Horses rediscovers dozens of these poems and illuminates their power via passionate essays by 75 American poets including John Ashbery, Susan Wheeler, C.K. Williams, Wanda Coleman, and D.A. Powell.

“In a culture that frequently overlooks poetry, this collection fights valiantly against the dying of the light.”
—The Washington Post

“The idea behind Dark Horses started as a conversation among five poets about “wonderful, obscure poems we’d come across over the years.” After musing on the topic and sending poems back and forth for a couple of months, two of the poets, Katz and Prufer, decided to issue invitations to a hundred poets, asking them for an “unknown or underappreciated poem written by anyone, in any language, from any era.” What ensues here are seventy-five poets who responded, with the poem each chose accompanied by a brief essay about it. Dark Horses reintroduces readers to both obscured poets and obscured poems by well-known poets. “Guide to Marine Mammals and Sentence Structure,” by Adam Hammer, chosen by Jim Daniels, is likened to “Walt Whitman on acid:” “The Teeth-Mammal was sad, and cried real teargas, and was naked at last.” As a testament to the bond between reader and poem, the anthology gives us the personal stories of many poets who took this project on as a way to reveal how they first came to love poetry. Lucia Perillo writes of John Logan’s “Three Moves:” “I’ve always been a tad afraid that my enthusiasm for this poem springs from the fact that my first hearing of it was an inaugurating moment in my life as a poet. But, as always when I revisit this poem, I am amazed.” —Virginia Quarterly Review

“This anthology can help us understand the ways that issues of disregard and rescue intersect with those that underlie competing schools of American poetry. By choosing both traditional, referential poets on one hand and radical, poststructural poets on the other, Katz and Prufer provide an especially helpful view of the key differences between the two groups.” —The Georgia Review